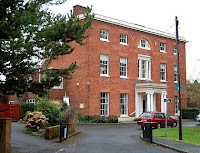 Back in January the local council at Dudley in the West Midlands announced they wanted to close the world-famous Broadfield House Glass Museum by March 2010. This despite the fact that BHGM is one of the top-rated glass museums in the world, never mind in England.

Glass lovers everywhere (me included!) were motivated to fight the closure plans, and the fight goes on. It's moving from the realms of Dudley, where the council never seem to listen, to the halls of Government where Linda Waltho, MP, will raise an Adjournment Debate later today (June 18th) in the House of Commons. Barbara Follett will be the Minister replying to Lynda on Thursday so if she were to receive letters/emails from other MPs or Museum supporters that would help the campaign. http://www.barbara-follett.org.uk/contact/index.html

Photo courtesy of The Friends of Broadfield House Glass Museum
Posted by Anne at 01:10